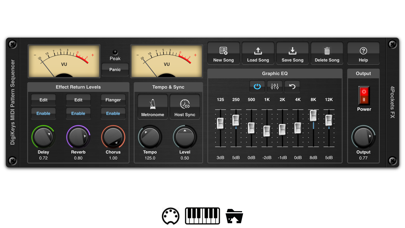 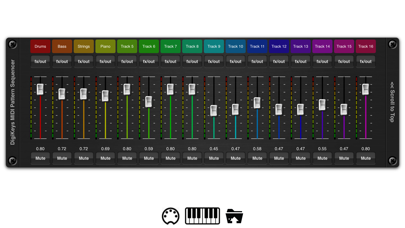 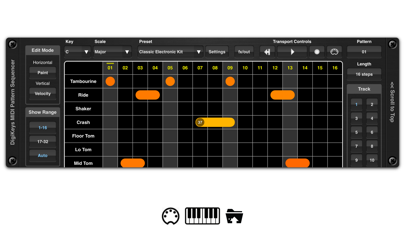 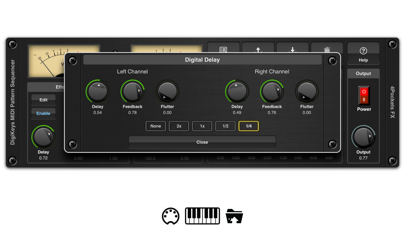 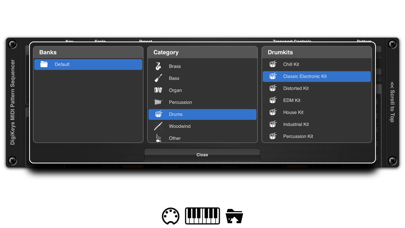 DigiKeys is a pattern based sequencer which can be used to drive either external MIDI based AUv3 instruments, or the internal sample based audio engine. It can also be used as a 16 channel multi-timbral sound source accepting MIDI data on each of the 16 MIDI channels and routing to 16 internal instruments. This flexible design allows you to experiment with pattern based song construction using the DigiKeys sound engine, then map to external MIDI based synth engines once an idea needs expanding. The program was created specifically for AUM, but should function fine under any DAW of your choice (routing options permitting). The advantage of AUM is its unlimited routing flexibility, and the ability to split MIDI output in order to feed multiple AV3 sound sources

DigiKeys allows you to create looped patterns which can later be chained into songs. Each pattern has 16 tracks (one for each MIDI channel) which can be up to 32 steps in length. Each track can have its own playback speed, transposition and effects routings. You can chain up to 256 of these patterns together into a song, and since each song is tied to a scale, you can use the transpose function to quickly create chord changes without needing to redesign your patterns.

DigiKeys was designed to drive other MIDI compatible AUv3 plugins, but comes equiped with its own internal synth engine with over 100 custom presets. If you own the 4Pockets Chameleon sampler plugin, DigiKeys will auotmatically make those instruments available to you, so its easy to expand the library of instruments using Chameleon.

The app has its own custom MIDI mixer, which controls incoming / outgoing MIDI velocity levels rather than traditional audio levels. This allows you to control relative volumes of internal as well as external MIDI instruments. It also allows DigiKeys to be used as a multi-timbral sound source with level mixing, by routing MIDI data on each of the 16 incoming ports to seperate instruments.

DigiKeys features a sophisticated random pattern generator capable of taking advantage of random velocities, probability, note length, sub beats and reverse hits. It can even randomize targetted notes that comply to a chord in the song scale.

The latest update introduces a live matrix performance mode that lets you mix tracks from different patterns in real time, creating scenes to aid your performance. Patterns and scenes can be triggered remotely from MIDI equipment sending simple note data on MIDI channel 16. Also recently added is the ability to route internal sound to different output busses for adding external effects in AUM.

We also include 3 global effects, reverb, chorus and digital delay which allow per track routing.